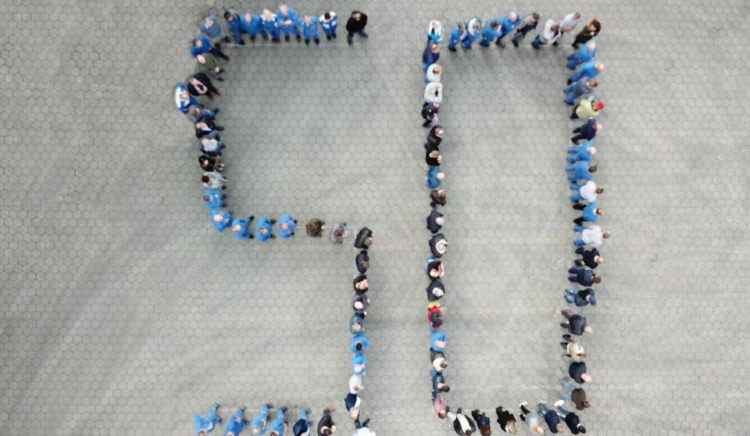 Exactly on the 22nd of October, 1969, the former Euramax Extrusions was founded in Mijnheerkens (NL)  – reason enough to look back at the eventful history of the company:

The company belonged to the European branch of the American Alumax Inc., which was then managed by the joint venture between Amax and Mitsui in 1974. The name Euramax is a combination of “Europe” and “Amax”.

At that time, the Euramax extrusion companies were organisationally part of Kawneer Inc., which combined extrusion and anodising plants. In addition, Kawneer already had an organisational structure in Europe, so that the Roermond site was selected for the first Euramax plant.

In the mid-1980s the company planned a new office building and a factory in the new Roerstreek industrial area. In 1986 Euramax moved into the new premises and developed into a renowned supplier of extruded mill-finished, anodised and coated aluminium profiles. These are mainly used in construction- and building products (architectural systems, shower cubicles, sun protection).

In 1994 Alumax decided to go public on the New York Stock Exchange. The name was changed to Alumax Extrusions B.V. In 1998 Alcoa takes over Alumax worldwide. From then on, the Roermond-based company was called Alcoa Roermond Extrusions and operating with the official name Alcoa Nederland B.V.

In the following years, Alcoa let go of several locations. In this way, the Roermond site found its way to apt: via the former sales manager, deputy managing director and later European president of Alumax, Frans Kurvers. He joined apt in 1999 as a shareholder and managing director.

On the 1st of April 2004 at 6 o clock a.m., Frans Kurvers held the keys for the production plant in his hands. All employees were solemnly involved in the renaming to apt Kurvers B.V. Since then, investments have been made in the location. In 2005 the office wing was rebuilt and completely renovated. In the same year, a cooling system was installed for the anodising plant. In 2006 the P27 extrusion press was launched, and in 2007/early 2008 the state of the art P25 press was inaugurated.

The name was changed again in 2017 to apt Extrusions B.V.

In the recent past, apt Extrusions B.V. has continued to invest heavily to increase its business. An MPS saw was purchased in 2017 and a spindle saw in 2018. A processing machine will be installed in November of this year and further investments are planned for the future.

When apt took over the company in 2004, the plant in Roermond produced 11,000 tonnes of extruded aluminium profiles every year. This capacity has since been increased many times over. apt Extrusions B.V.’s customers include renowned companies from the automotive, construction and industrial sectors in Benelux, Germany, Scandinavia and Great Britain. With the vision Essential parts. Essential partners. and the planned further growth, the company sees itself excellently positioned for the future.

A peek behind the scenes of apt Extrusiosn B.V.
Scroll to top